Most of us are used to brushing our teeth before bed and in the morning to freshen up. What many of us often forget, or don’t prioritize enough, is flossing.

In a 2016 CDC study, it was found that only about 30% of the population floss daily. People over 75 were more likely to report never flossing (45%) than those between 30 and 34. Perhaps that’s because research on the importance of flossing wasn’t really around when these folks were growing up.

What’s sad about this is that is shows how little people understand what really happens when you floss your teeth. Flossing plays a vital role in oral and overall health. Unlike a toothbrush, which cleans the surfaces of the teeth, floss is designed specifically to clean the tight spaces between the teeth where tartar builds up. There’s no alternative to flossing that can do what it does.

Here are our top five reasons why you should floss your teeth now (and make it a priority going forward): 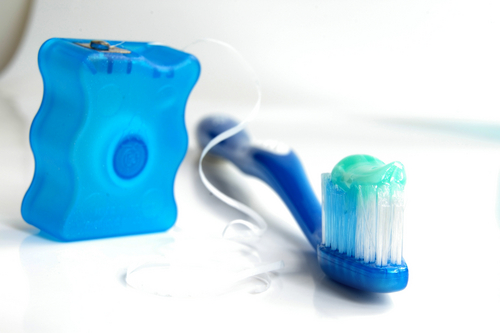 1. Protect your teeth from gingivitis. Tiny particles of food can get lodged between your teeth and plaque hardens over time to form tartar (which only the dentist can remove with a scraper). Tartar buildup leads to gingivitis, the first stage of gum disease, characterized by red, swollen, bleeding gums and bad breath.

2. Protect your teeth from periodontitis. If left unchecked, the bacteria-laden tartar can extend below the gum line and infect your gums. Periodontitis is a severe gum disease that causes inflammation and eventually tooth and bone loss.

3. Make sure you don’t end up losing your teeth. Over time, if not taken care of, gingivitis and periodontitis will cause your gums to recede as bacteria breaks down the collagen responsible for holding teeth in your mouth. Periodontal disease is the most common reason for tooth loss in adults.

4. Save money. As health care costs rise and insurance benefits fall, it pays to take steps to decrease your medical expenses. Research conducted by the Children’s Dental Health Care Project (CDHCP) showed that low-income children who went to the dentist by age one had dental costs that were 40% lower over a five-year period than other children who did not visit a dentist. This same study showed that emergency room costs end up being as much as 10 times higher as the cost of dental checkups during the same time period. By flossing daily, you can prevent many of these costs down the line that you would otherwise pay out in periodontal treatment, tooth removal, and tooth replacement.

5. Prevent other diseases. Oral health has been linked to heart health, and the connections don’t stop there. Extensive research has demonstrated that the bacteria that live in an unhealthy mouth can harm other parts of the body. That’s why the CDC has called for oral health initiatives to prevent systemic disease such as diabetes, respiratory illness, and other organs. Oral health has even been found to have a cyclical relationship to mental health!

You may be wondering how often you should floss to achieve these flossing teeth benefits. For most people, flossing just once a day (which takes less than five minutes!) is enough to do the job, but twice a day is better. If you’ve had a history of gingivitis or periodontitis, you may be given a different oral care regimen by your dentist.

Fun Tip: If you have sensitive gums or feel clumsy with the floss, we recommend getting soft dental flossers. Many people who don’t feel comfortable with floss find that this is an easy and painless way to get into the routine.

Our challenge for you today: floss your teeth.

You’ll be glad you did!

If you have questions about flossing or your overall dental health in general, contact Penn Dental Family Practice at 215-898-PDFP(7337).